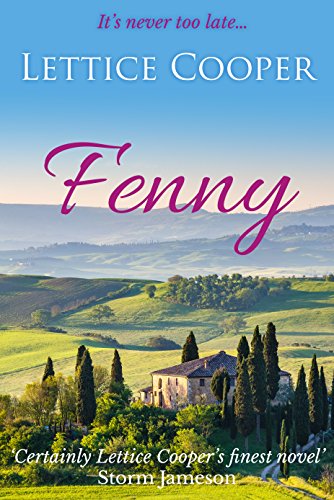 Ellen Fenwick, commonly known as Fenny or Elena, a burnt-out, single English teacher, jumps at the chance to become a governess for eight-year-old Juliet, whose family is recuperating for some months in a villa near Florence. She has been caring for her sick mother and has never travelled before, never experienced romance.

The story starts in the 1930s and goes through multiple convolutions, including Fenny spending WWII as an ‘enemy’ in a miserable Italian internment camp, where she picks up the illegitimate son of a dying woman.

Lettice Cooper does a brilliant job of portraying the fluctuating moods and idiosyncrasies of the main players – Juliet, Madeleine, Daniel, Lucrezia, Shand, Arturo, Dino, Elina, and, of course, Fenny herself. We share their yearnings, frustrations, despair. The seasonally changing Tuscan scenery and the contrasting characters of the carefree rich and the highly strung opponents of the Fascist regime are also very vividly presented. In particular, we are captivated by Fenny’s emotional rollercoaster through a couple of arm’s length romances and her divided loyalty between boring old England and her hot-blooded, spontaneous adopted home.

After the war is over, the grown-up kids who used to play together in the garden, dam the stream, build a grotto – Juliet and Shand – meet again and a sweet romance develops. Fenny attempts to make the best of life with her temperamental adopted son, her third ‘child’, now an obstreperous teenager.

Cooper has mastered the language, atmosphere building and plot superbly. In light of such professionalism, I was surprised to find many rather unrealistic dialogues, consisting of alternating soliloquies, and occasional SPAG errors.