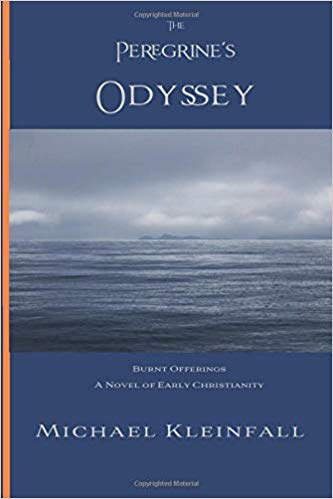 During the first 20 years of the second century AD, Gaius Segusiavus Peregrinus is torque-bearer of the Gallic clan based near Lugdunum (Lyons). As master of the family’s cereal and luxury goods shipping enterprise, he constantly roams Mare Nostrum, visiting the trading posts in Ostia (Rome), Carthago, Alexandria, Antiochia and Ephesos. His faithful wife Fionna delights him whenever he is back at the Villa of the Three Crows, but his sons and nephew disappoint him. Will anyone prove worthy of inheriting the family torque when he dies?

Gaius’ lifelong friend, the Jew Ignatius, becomes a member of the illicit sect known as Christiani. Together, they are instrumental in rescuing the aged Apostle Ioannes from his exile on the island of Patmos and bringing him to the community of believers in Ephesos. Through these towering characters, including historical letters by the later canonised St. Ignatius of Antiochia, we gain precious insights into the caring community of followers of Iesous Christos, their faith and the persecution they suffer. Will these intimate experiences convince Gaius to change his religion?

Geographic and historical details are meticulously accurate and very informative. Circumstances and prospects fluctuate under the Roman emperors Domitian, Nerva and Trajan, but all the while the Christians live under the threat of arrest and execution. What will happen when the most promising heir to the house of Segusiavus adopts the faith?

The family tree, maps and appendix with an afterword and a summary of the principal characters – historical and fictitious – are very helpful. This is a long book, unnecessarily drawn out, in my opinion, by recapitulating key episodes and including rather too many named characters who play only minor roles.

This review was first published by the Historical Novels Review.