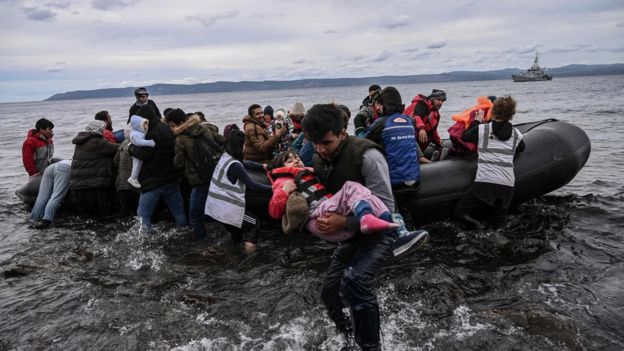 “Jurj?” the rebel fighter read from Tariq’s friend’s ID. “Then you’re a Christian!” And with that he shot his brains out. That was the final trigger. Tariq had to flee. To Europe. And arrange for his family to join him.

Selling his two shops and car enabled him to reach Turkey via Lebanon with $9000 sewn into his underwear. Then the difficulties started. JetSki over to Greece for $2000? Too risky. He paid a different smuggler double his asking price so he would squeeze only 32 people into a rubber dinghy designed for 12. Five minutes instruction on how to handle the outboard motor. At 3 a.m. they set off, heading for a distant light on a Greek island. The other four boats, each carrying 40 or 50 people, all foundered. Tariq wept at the sound of the screams from the drowning occupants – adults and children – but what could he do?

They pressed on. The boat began to leak. People scooped the water out with their shoes. 200 metres from shore, the air chamber burst. Those who could swim helped the others and all 32 survived. For three desperate days – soaked and starving – they waited on a tiny island. Together with hundreds of similar fugitives. What else could they do?

Eventually they were bussed to a refugee camp on a larger island, and later transferred to Athens. There, a fat man smoking a fat cigar sold Tariq a $300 flight to Switzerland for $4200, fake passport included! What else could he do? On arrival, he applied for asylum. But what about his wife and four school-age children, facing daily bombing in Aleppo? Enduring a miserable existence in an underground shelter for the next year, Tariq continued to plead for permission to bring them to Switzerland. At last the family was reunited.