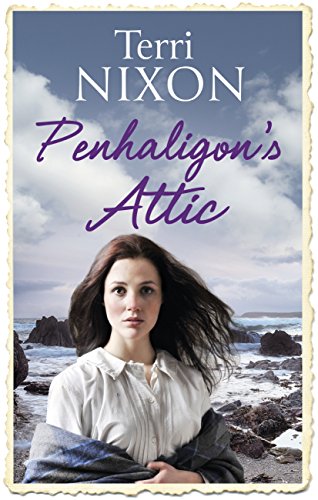 Barely recovered from almost drowning when she went out at night to welcome her dear father back from his fishing, a new tragedy shatters eight-year old Freya’s heart: her mother is taking her away from her beloved Cornish village to London – for ever, it seems.

Her father Matthew is also broken with remorse, as he admits his unrestrained drinking was responsible not only for his family’s breakup but also for the accident which caused his skipper friend’s injury and the resulting hostility of that man’s son, his best childhood friend. With no permanent job, Matthew moves in with his elderly parents, who run a second-hand bookshop, called Penhaligon’s Attic.

The plot thickens seven years later when, after all, Freya is sent back to her father, who has stopped drinking, because her mother is running off with her new man to America, and the mysterious Anna Garvey arrives from Ireland with her teenage daughter Mairead, claiming she owns the village pub. A project to revitalise the bookshop, a sordid girly affair and a widows’ mutual help guild are some of the intriguing subplots. Freya’s morbid fear of the sea as a result of her near-death incident as a child and Mairead’s epileptic seizures add to the vivid drama. In fact, all the main players are very well developed and we catch a realistic glimpse into the lives of rather hard-up Cornish fishermen and tin miners in the early 20th century.

Things come to dramatic head when Anna’s supposedly dead surgeon husband arrives from Ireland and is enraged by discovering she has started a romantic relationship with Matthew Penhaligon. The last chapters introduce unexpected twists and a highly ingenious solution, but here the pace and rapid mood changes are somewhat implausible.

Altogether a vivid, very well written book, which inspires the reader to find the next book of the series.

One thought on “Penhaligon’s Attic by Terri Nixon”